One repair leads to another! 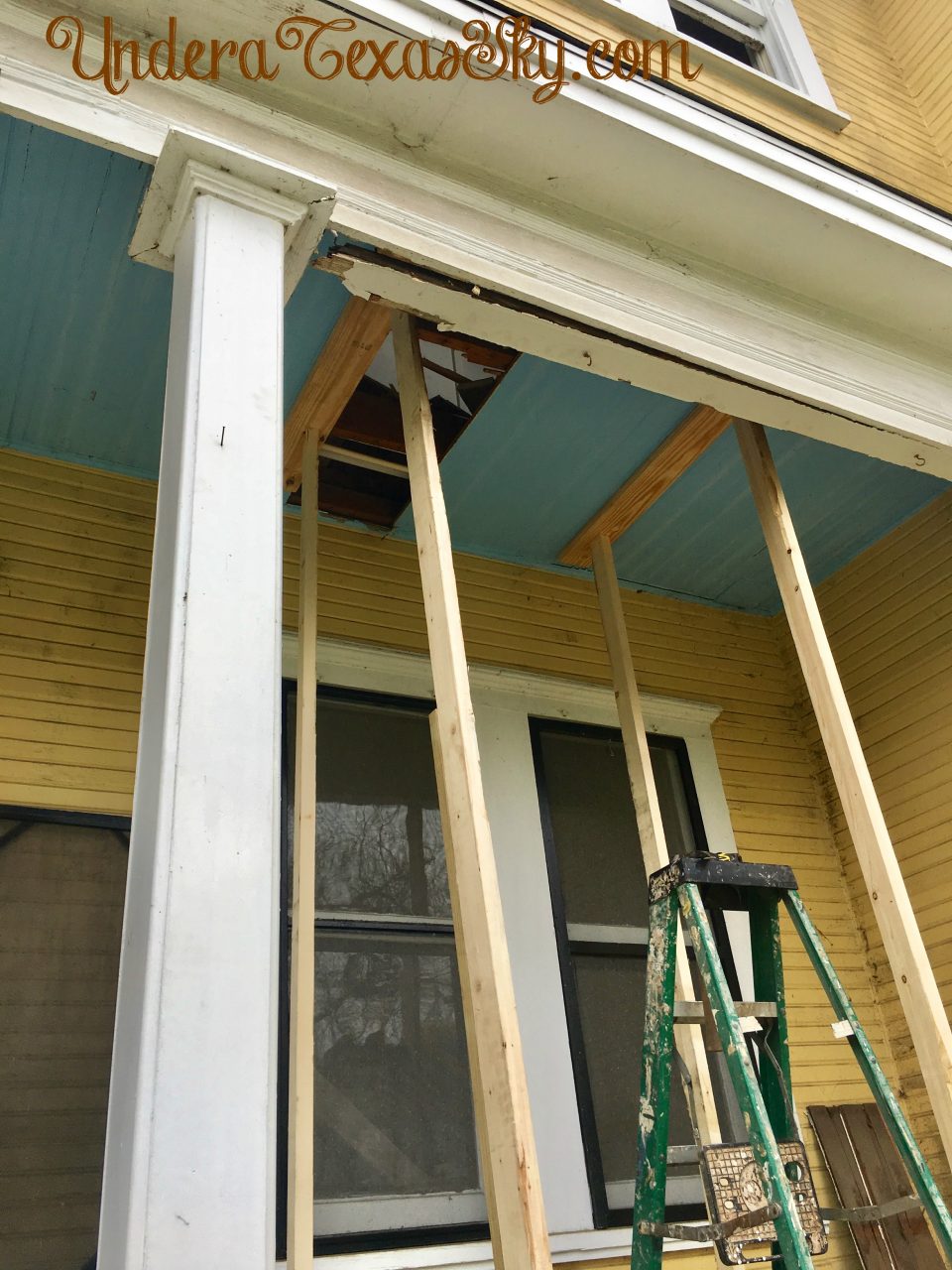 When you buy a house that’s 117 years old, just know that it will need mending; LOTS of mending. We had no idea going into this journey just how many things would have to be repaired just to make the house truly; safely, livable. As you know from my “Demo Day One” post, just getting the water turned on wasn’t even easy!

We’re now one week into the demo and repair phase of the Kimbrough-Bell house. The movers got our moving trucks unloaded on Tuesday, I believe. Even though the house is still total chaos, I feel better just having my stuff near me. We managed to get the living room semi-set up with the couch and love seat, coffee table and TV console. It’s also jammed full of boxes, chairs, dining table, and boxes, etc. BUT we do have a little coffee station set up as well; LIFESAVER!

The past seven days have been a straight up blur. Our moving experience was a disaster when we hired the WRONG team to move us. Needless to say that first full day of truck loading was mostly wasted with incompetence the likes I’d never before seen. We did hire a great team the next day to finish the job, and do it right. It cost us an extra $400 but getting our things protected and delivered in tact was so worth it.

A couple of days later we hired another team of wonderful kids who came out and emptied the trucks. Having contractors working on the house while our possessions were being placed about had it’s own challenges but everyone worked their butts off and made it happen.

So back to the renovation of the house. On Tuesday, we had the team from M2 Construction get started on tearing out the first and second floor bathrooms. On the second floor, the floor beneath the claw foot tub seemed to be slanting pretty hard toward the outer wall. After pulling the tub, they discovered there had been a water leak (surprise, surprise) and the floor was rotted. Upon further inspection, they realized not only was the floor rotted, but the framing of the lower side porch below was done improperly and rotted as well. The support beam for the porch (the part that’s holding up that second floor bathroom) was easily turned to sawdust with a few taps!

Thank goodness they caught this potentially deadly problem before disaster struck. They had to attach support beams to hold up the roof while they went about making repairs to the rotted roof, header beam, and post (which they, of course, replaced).

Not to be outdone, the first floor bathroom had extensive damage as well. Water from the upper balcony (or Widow’s Watch I’ve been told, thank you Theresa!) had poured down into the wall below for what must have been years. This led to the outer wall of the bathroom being completely rotted.

Sure enough, after the room was gutted, that back wall had rotted posts and the siding was crumbling. A really cool discovery was made, however. It seems that when this house was built in 1900, they included a cistern to catch water for them to use. When this bathroom was added, they covered it up to be forgotten until we discovered it.

This 11.5 foot hole is under by bathroom floor. I love this discovery. It sort of makes us feel like we know the house a little more. The knowledge that people lived here so many years ago became more real to us upon this discovery.

There’s an awesome balcony above the bathroom that was gutted. It’s just off one of the guest rooms. Guess what. Yep, the bases that hold up the pillars that support that structure are also rotted. Those post and rails have been taken down and are being rebuilt. Amazingly, the actual pillars that are original to the house are rock solid. I have a feeling this is going to be a lovely place to take a cup of coffee or glass of wine. I may even do some blogging from there once it’s completed.

Our biggest issues have been with the plumbing. We have had a plethora leaks all over the house. Having four bathrooms without maintenance for years has led to so many plumbing issues. Bad valves are the most frequent problems. Just when you think you’re in the clear, you come home from another trip to Walmart, only to find your only working bathroom floor is pretty wet. Turns out the only toilet we can use, has a leaky valve. It held fine for the past couple of days but just gave out. Now that toilet valve has to be turned on an off any time we need to use the facilities. It’s really almost hilarious. You just get used to the little extra quirks of purchasing a really, really old house. We have a new toilet and vanity for the “master” bath. For the first word problem of the day, shaving my legs in the tiny shower enclosure is almost impossible because I cannot position myself to where the shower spray doesn’t wash the soap off my legs before I can get the razor to them. Thank the Lord this is the type of problem I have to deal with.

The porch has been set up with lots of our patio furniture. The Mean Man worked on the yard tonight and started getting it into shape. We stood out in the street looking back up at the house and I was taken with just how beautiful it really is. Did I mention that the house is directly across the street from a funeral home? There was a funeral there yesterday, and I was reminded that a cold shower here, and having to let a toilet fill with water each time you need to use it are small things as compared to what that family faced yesterday. We are facing the challenges of renovating a beautiful old home, but at the end of the day, we’re at home. Someone else wasn’t lucky enough to make it home. I’ll take some first world problems as compared to the sadness associated with tragedy.