We have happily extended our living space to the outdoors. When we had our pool installed just after we moved into the new house last June, we had the contractor also build a pavilion off of our patio. We started with our small patio furniture set we’ve had for almost 8 years. It consists of a love seat, two chairs, a table and a couple of ottomans. It is functional, but not really “homey.” We moved that set out to the deck by the pool. We decided to upgrade our outdoor furniture to something that would better accommodate our friends when they visit. We went with a set that has a sofa (seating for 3) in addition to the two chairs, ottomans, and table. We also purchased an outdoor rug to anchor the space.

This set up was functional, but still did not really feel like an extension of the indoor living space. I decided to add some of the kinds of  pieces that I have inside; side tables for instance. 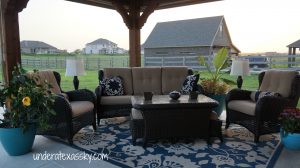 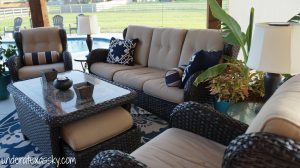 I added the two side tables then searched for some kind of lighting. I discovered solar lamps at Lowe’s and took a chance that they’d actually give off some light. I also warmed up the space (and this is a turn of phrase cuz it’s summer in Texas, baby- you ain’t gonna make it warmer than it already is) to make it more inviting, with a large hibiscus shrub in a big planter along with a banana plant and some greenery in an even BIGGER planter. This really did the trick! 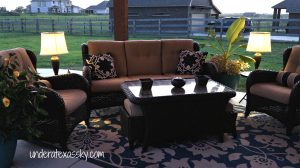 I believe we were able to create a true “living space” out under the pavilion. I try to swim every night and it’s so nice to have that space to relax in afterwards. We also have a TV mounted up in the eves so I get my fill of major league baseball as I work out in the pool, then have a space to kick back under the pavilion. 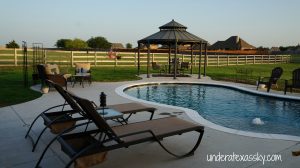 Here is the deck and gazebo. We still have work to do but figure all we have is time so we’ll just take it one little project at a time. Landscaping behind the pool is next!