The Kitchen has been Transformed! 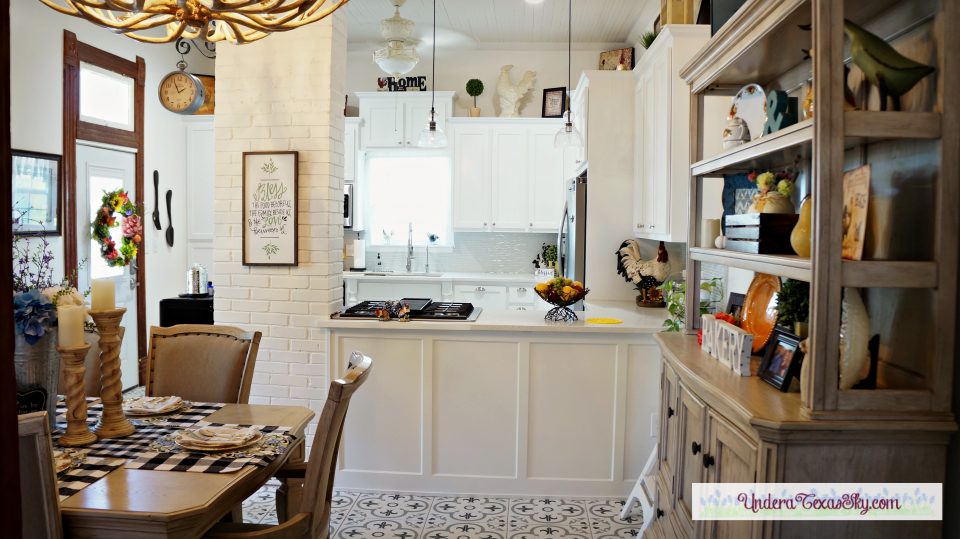 When we first had the realtor show us our Yellow Texas Rose we were skeptical. Who am I kidding, we thought, “man, there’s no way;” the place was a hot mess. The kitchen was especially awful. It was clearly not functional. There was no dishwasher, the sink wasn’t even really installed, and the plumbing was disconnected. It also had no range. We understood immediately that the bulk of our renovation money would have to be spent here.

We got a quote on cabinets that we could install ourselves. This option was abandoned once we realized that we were going to have to do some actual construction to close up the pantry and add cabinets along that wall. Our contractor also has a cabinet shop. He asked if they could quote us on building the cabinets. That sounded good to us. They came in at about $3,000 more than us purchasing cabinets and installing ourselves. Their cabinets were superior in every aspect plus the quote included them doing the installation. We showed them the plans the other cabinet company had drawn for us. That gave them the “go-by” to get ours done.

This same company was also doing the renovation on the entire room, so they got started immediately ripping out the paneling and wallpaper. They also took down the wall between the kitchen and dining area. We were expecting the original shiplap to be under it all, but it turned out it was probably 90 year old beadboard. We wound up having them remove everything down to the studs except for the wall connected to the main house. It was shiplap.

The bead board was stripped so drywall could be installed (we used it on the ceiling). Extra framing was adding to support the cabinets. Unfortunately, the main electrical panel was located on the wall next to the back door. This isn’t up to code so we hired and electrician to move the box. He also wired for new plugs and lighting. We found the flooring we wanted in Austin. Having had the foundation repaired a few weeks earlier, we were afraid the tile would be difficult to install. Our guy did a great job considering all of the small hills and valleys the floor has.

Not all sunshine and roses

The cabinet company doesn’t use any kind of computer aided design software, so everything was hand drawn. On the one look I got at the plans, I didn’t notice that they had neglected to include the dishwasher. This was evident the day they started the installation. They ended up ripping out the wrong cabinet and having to build a new box for the dishwasher. They also had to build a small filler cabinet that we use for cookie sheets.

It took several weeks to get the installation of the cabinets completed. It was exceedingly frustrating, as I never knew when they were going to show up. Seriously, they’d show up on a Monday and we wouldn’t see them again that week. I was ready to pull my hair out. Once they got the cabinets all on the wall, I realized they’d failed to give us the promised soft close hinges and drawers. Little side note; GET EVERYTHING IN WRITING. We just went with a handshake. This is a really stupid thing to do. However, the contractor did make it right and all hinges and drawer glides had to be changed out.

Then, when the doors were installed, I realized that the finish wasn’t the same on all of the doors. They finally sent someone who was supposed to do all of the paint touch up and finish work on the cabinets. Upon realizing that not all of the doors had a semi-gloss finish, the bad doors were removed to go back to the shop to be repainted. Bare in mind, I’d already paid for the cabinets in full several weeks prior. I could have spit nails, I was so angry with the situation. 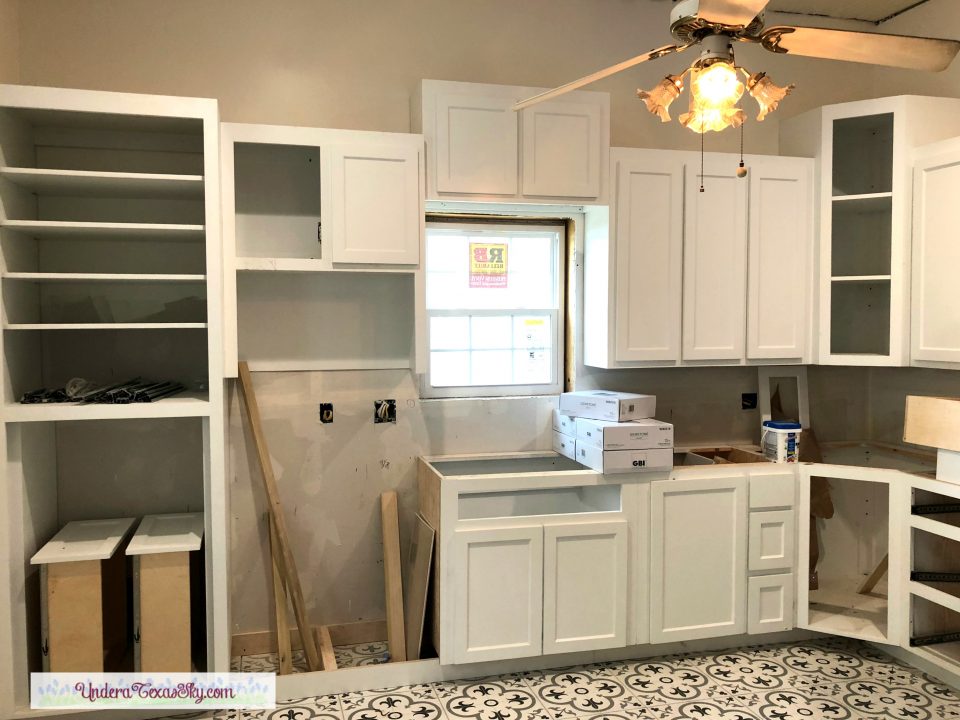 Turns out, when they installed the cabinets around the refrigerator box, they shifted that box. Consequently, the refrigerator would not fit! Seriously?? By then, the countertops were installed and we had no choice but to trim away part of the box around the fridge. The same stinking thing happened with the dishwasher. But the worst was yet to come. When they figured the space for the range, they neglected to consider the lip at the top that rests on the counters. Because of the brick column, the dadgum range would not fit. We were about one sixteenth too wide. The Mean Man took some miracle tool and ate away the area of the brick column needed to be able to slide the range in. We’ve yet to clean that area up and paint, but it hasn’t hindered use of the range.

It all came together

In spite of all of the nightmares, things eventually all came together. We learned a lot about how to NOT handle a renovation. The day I was able to start unpacking the kitchen boxes was a banner day! It was crazy, it seemed like the boxes were breeding. The more I unpacked, the more there was to unpack. After about three days, things were feeling like home. 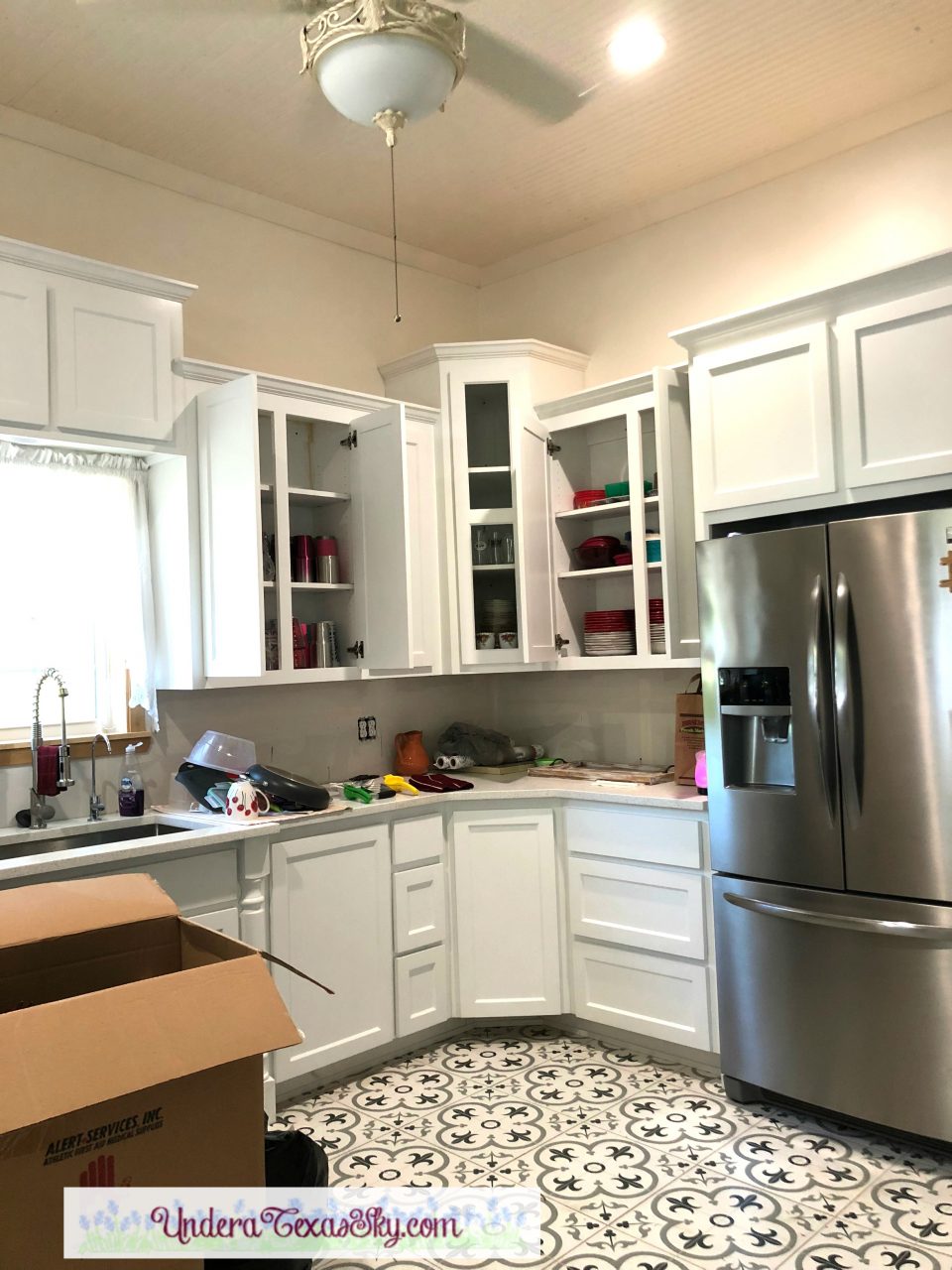 Stroll on to the next page to see some before and after pics.