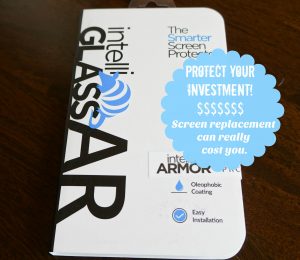 Did you know that according to C-NET, Apple charges over $125 to replace a damaged screen on an iPhone 6? I don’t know about you, but I would not be able to afford this (or I’d suck it up and pay it, but I’d be really sad about it). There is a way to add a layer of extra protection to your phone’s screen. According to IntelliGLASS by IntelliARMOR their screen protector  has a surface hardness of 9H- only a diamond is stronger. Now, I’m over 50 (just barely!) but I’m not necessarily super hard on my phone, outside of dropping it every now an again (I did break my lovely Christmas gift phone case within three days of having it) but I do worry about scratches on the screen as my phone tumbles around in my purse. This extra layer of protection takes away this fear.

My future son-in-law has this screen protector on his phone and shared with me that he was on his motorcycle and actually dropped his phone out of his pocket as he pulled out of his driveway. His phone fell hard face down against the pavement and he very happily discovered that his IntelliGLASS had protected his screen. It wasn’t broken, or even scratched. I was also impressed!

The screen protector is very thin. You can barely feel that it’s there when you use touch the home button. You really can’t even tell it’s there otherwise, other than the screen is nice and clear. It claims that it’s special coating will control smudges and fingerprints, I honestly still see them,  but the smudges are definitely not as strong as they appear on the unprotected screen. I also noticed the screen protector definitely shows less glare on my phone when I have it on my desk in my office. The glare from the fluorescent lights along with the usual smudges are absolutely less visible with IntelliGLASS installed. The screen looks beautiful.

As far as installing the screen. It could not be easier. I followed the instructions explicitly.

Considering the affordability of the product, I can’t see a reason why you wouldn’t want to buy it for your own phone. Whether you’re a person who is constantly fumbling with and dropping your phone, or just a person who occasionally has mishaps, I think the IntelliGLASS Screen Protector is worth utilizing. I recommend it. If you’re interested in purchasing- here’s a 20% off coupon code: intelli20! Go to  www.intelliarmor.com to order.

*This post is sponsored by IntelliARMOR and I in no way guarantee the claims made by the company. The opinions are my own.