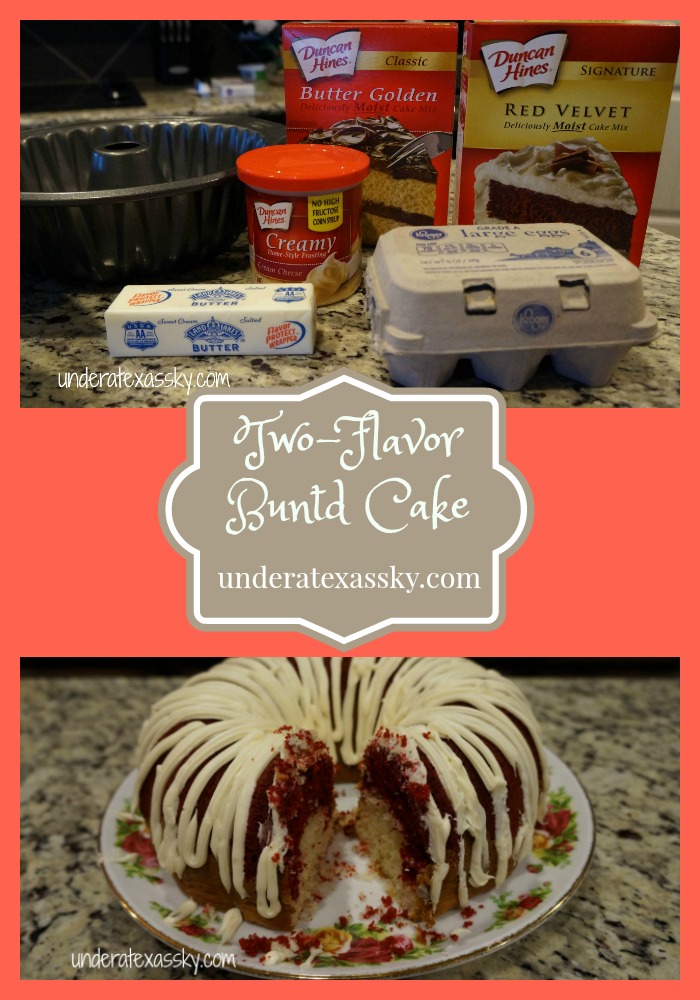 Sometimes you just gotta have cake. And honestly, a cake made at home is just better than a store bought cake. If you’re going to take the time to make one, this easy two-flavor bundt cake is just the thing.  So, the people who know me, know that there is just no way I’m going to make a cake from scratch; I used two boxed mixes. Even with store bought mixes, this cake will make people think you worked much harder than you did to accomplish its pretty presentation.

Now, when you’re deciding on what cake mixes to mix, do better than I did. I just went with what sounded good and paid no attention to HOW the cakes were made. Some mixes take butter, some oil. In my case, the red velvet mix took oil, and the butter cake took, well, butter. My mixes didn’t even have the same cooking time (which as you can imagine, is not ideal). But did I let that stop me? No ma’am! I forged ahead.

Here’s how I did it:

I wanted the red color on top so the red velvet went in the bottom of the bundt pan (because when it’s turned out of the pan, of course, it’s on top). If your batters are both the same color, just add a few drops of food coloring to one of the batters to have two colors. Remember, this is going to make two cakes, since you have two mixes.

I was surprised at how thick the red velvet mix was. Then I realized that I’d only used 1/2 a cup of water instead of the required whole cup. Wow, d’uh. So I emptied the batter I’d already put in the first bundt pan, poured it back into the bowl and added the rest of the water and remixed- NOT the best start. But I, again, forged on. The second batter was really thick, by design. I mean, you have to mix it for four minutes. It was very fluffy and thick. I layered it in on top of the red velvet. 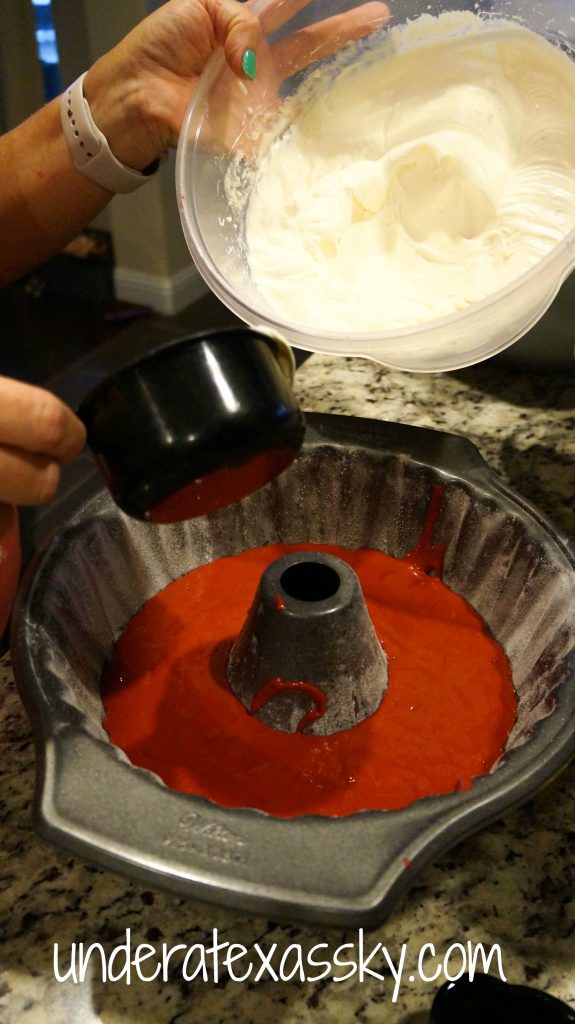 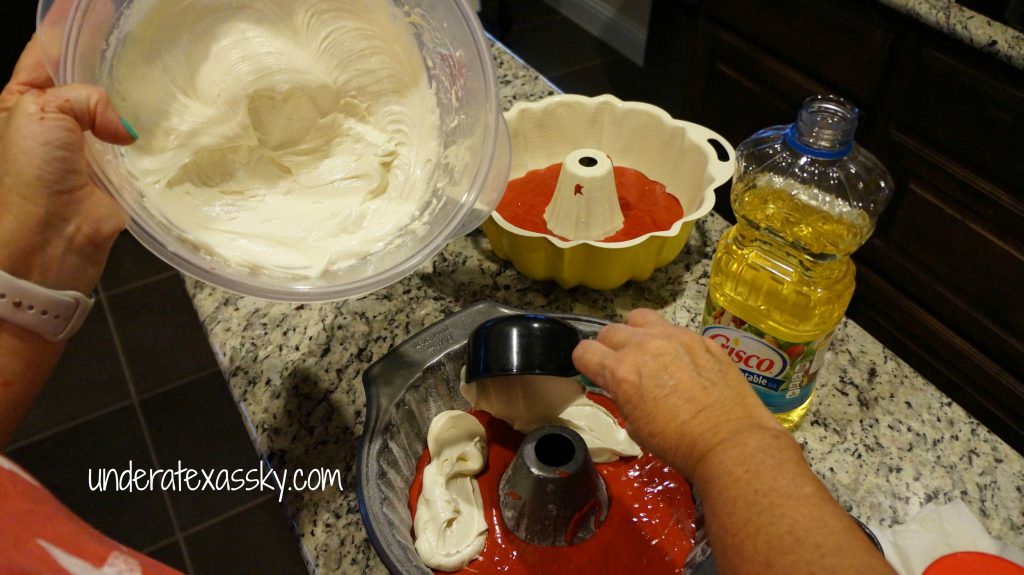 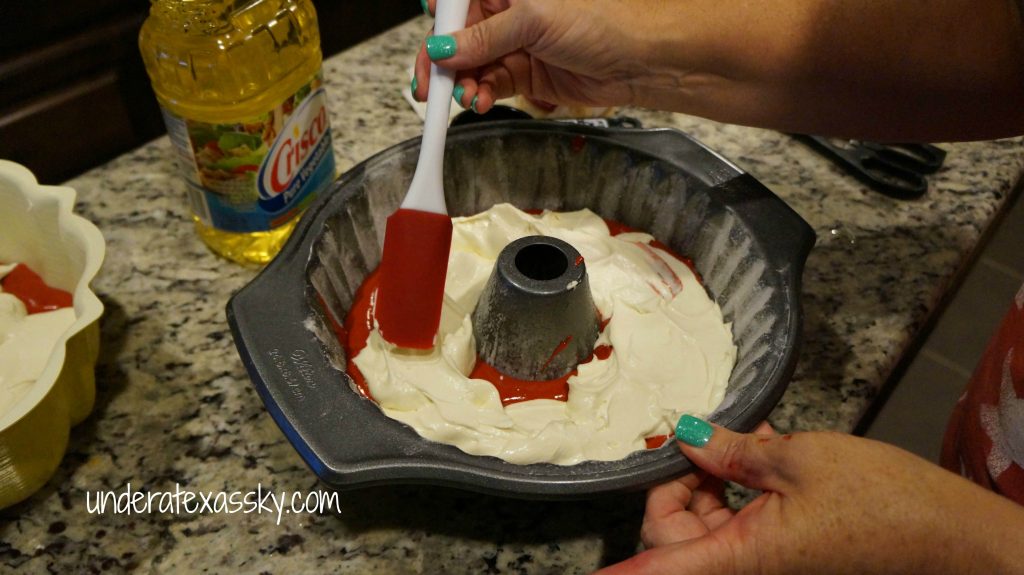 I popped them into the ovens and realized that the cook time was a little different for each batter. This is something I recommend avoiding. I used the toothpick method to test for doneness; you know, insert a toothpick and if it comes out clean- it’s done (mine came out a tad bit dry, no surprise there). But they looked totally cool! 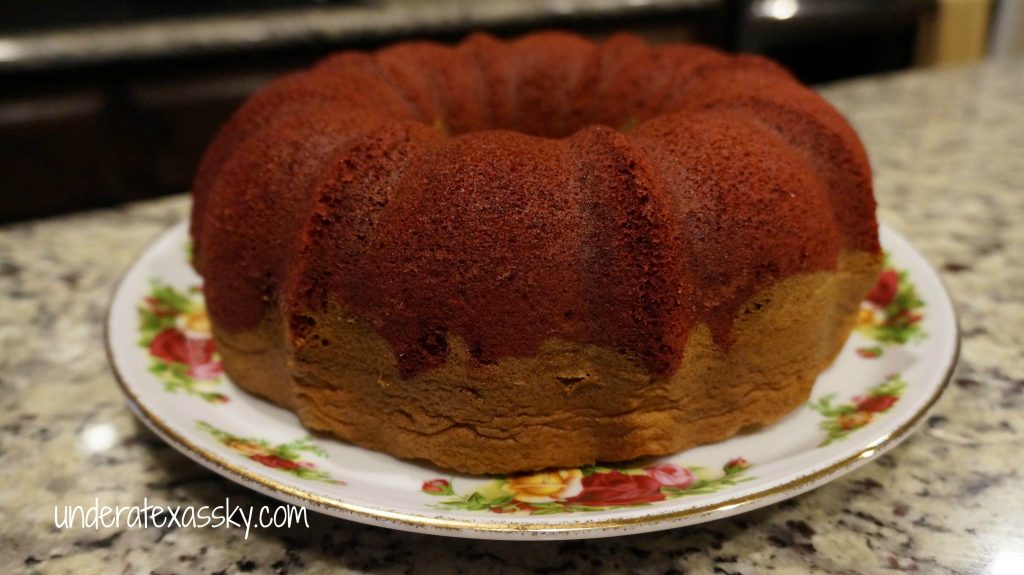 First try with a pastry bag- not terrible!

I purchased a can of ready-made cream cheese frosting- perfect for red velvet, of course! I decided to try a pastry bag for the first time. I used a star tip. On one cake, I started on the inside, squeezed the icing out as I came out and down the outside. I just made this kind of stripe all around the cake. 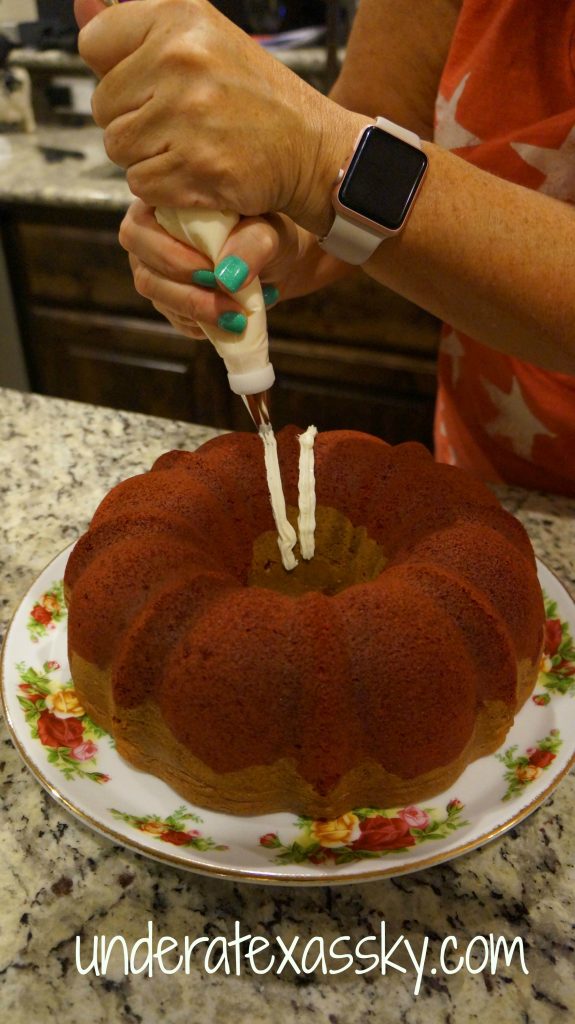 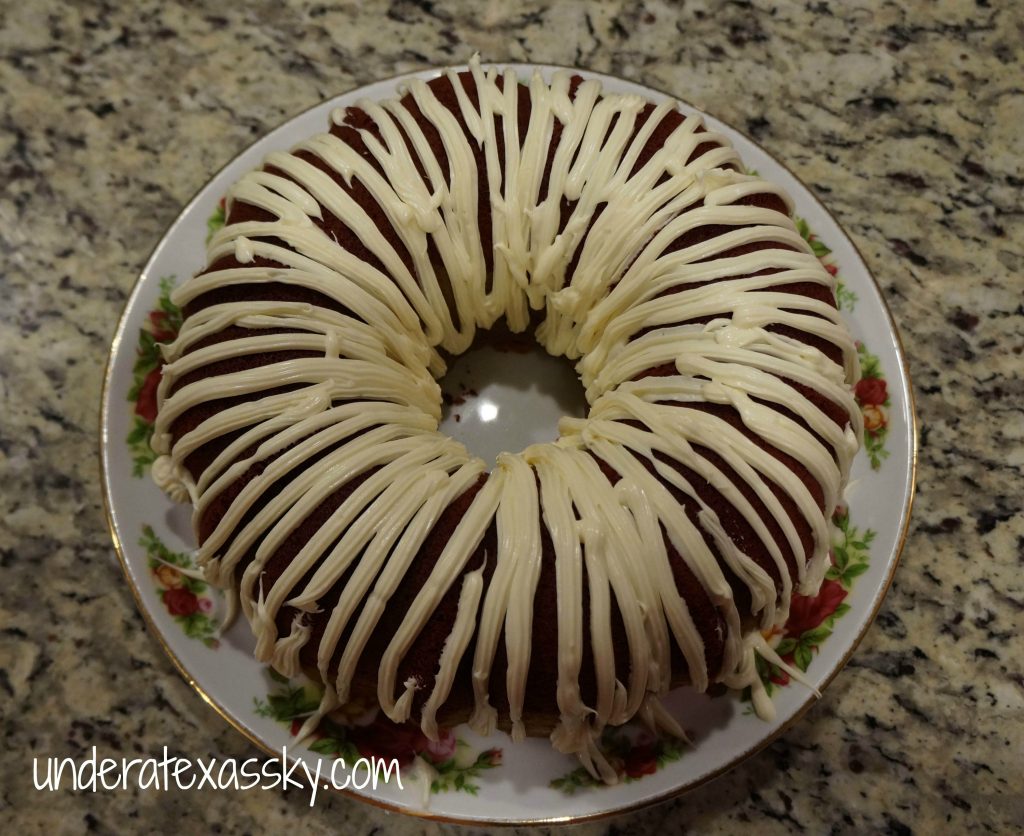 On the other cake, I used the same star tip but this time I just weaved the pastry bag in and out without stopping, until the bag emptied. I then topped it with some yummy toffee bits. 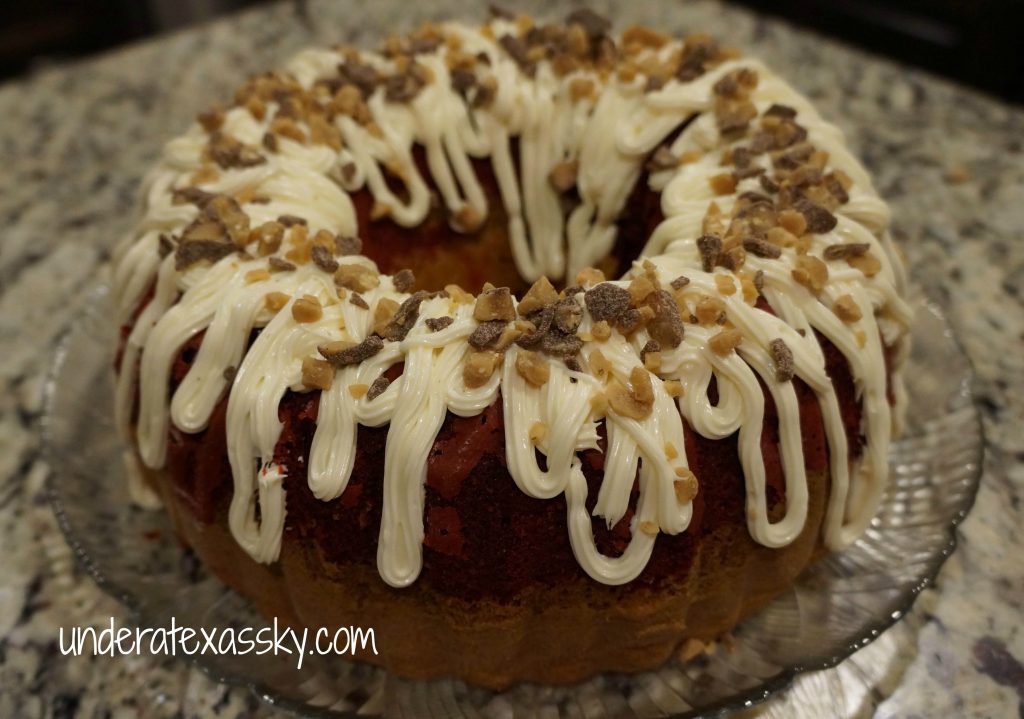 Even though my cakes didn’t turn out perfectly texture-wise, they are still delicious! And the inside turned out visually impressive, I think! 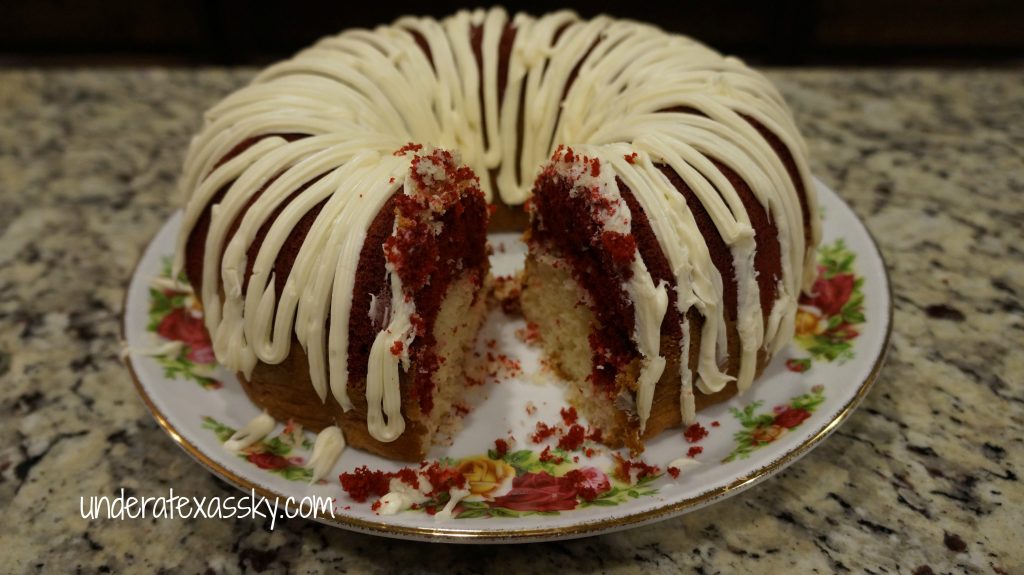 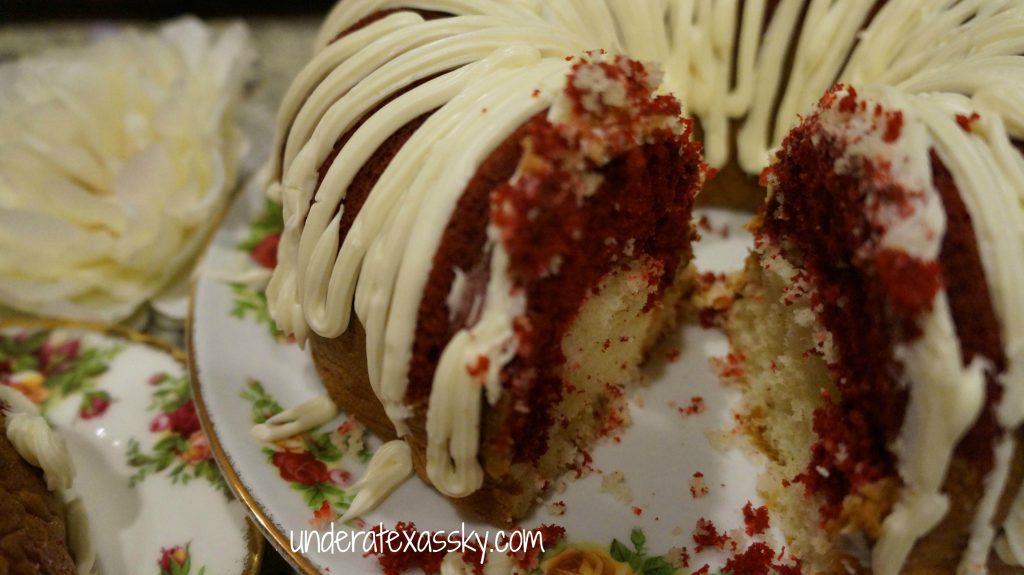 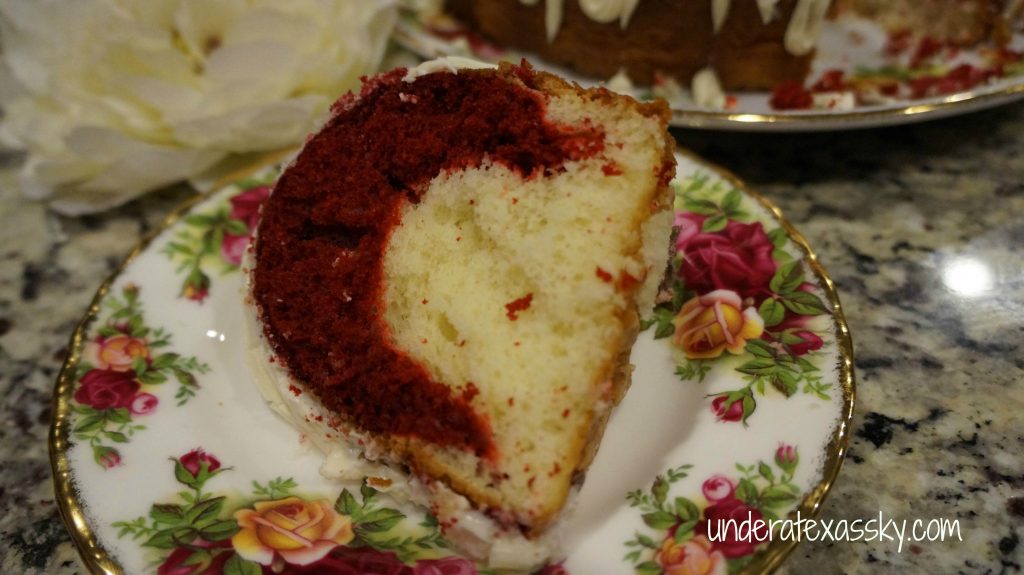