Losing weight- it really can be done

So, I used to weigh almost 300 pounds- how I lost weight 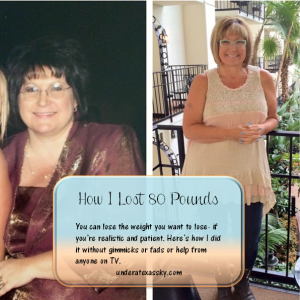 I’ve battled weight issues most of my life. I come from a long line of overly-plump women. Maybe it’s genetics. Maybe it’s being from the south and having a true romance with all things fried, smothered in gravy, cover in cream sauces, or full of sugar and starch. I LOVE ALL OF THAT. But when I tipped the scales at 283 pounds and was having to take two blood pressure pills a day, I knew I had to get healthier. Not skinnier. Not more attractive. But healthier.

My weight had become a hindrance to my life. We’d take the kids to 6 Flags and I’d have to watch them ride the rides because I couldn’t comfortably fit in the seats of the rides. My husband would offer to drop me off at the front door of the shopping center so I wouldn’t have to walk so far. I even spent time sleeping on the couch because I could not get comfortable in the bed. It truly was affecting my life and not just my health. I’d lost weight before, but not really for the right reasons. Trying to LOOK better was not enough for me and so I’d gain the weight right back again.

I talked to my doctor and he prescribed an appetite suppressant for me. Phentermine really helped curb my appetite. Now, I bounced up and down on my weight for a while. Then, I took my oldest daughter’s advice on counting calories. I went to caloriecount.com and entered a profile. I put in a goal weight and by when I’d like to reach the goal. It calculated the number of calories I could have per day to reach that goal. At first I specifically only counted calories. I did not exercise. In my opinion, I was just too heavy to do that. I was allowed 1330 calories a day. I downloaded the Calorie Count app on my phone and started keeping a diary of my food intake. This is VITAL. You’d be amazed at the number of stray calories we consume in a day. It seems like a beating to do this- but trust me- it holds you accountable. I didn’t worry about from where I got my calories. If I wanted a cookie, I ate a cookie. But I logged it and that was 200 calories of my daily allowable. If you eat healthier, you can eat more.

After I had gotten serious and had lost down to about 230 lbs, I started adding some activity. I got some two pound weights and just started “working out” in my room. I’d do cardio, stretch, and just get my heart rate up a bit. I started doing 10 minutes a night. I also bought my first of many fitness trackers. The Nike band didn’t do much, but it reminded me throughout the day that I needed to get up and move. I’d take a lap around the inside of my building at work several times a day. I eventually got my evening cardio up to around 20-30 minutes.

I thought- hey- I’m gonna take this outside. I’m gonna start running! I bought Runner’s World best shoe of the year… bought a ton of yoga gear… AND…. I HATE RUNNING! It’s awful. I decided a brisk walk is much more my style. Plus, I live in Texas. In May- September, under a Texas sky is blazing hot!! I moved the workout to the pool and get great cardio there each night.

Now, I still have ups and downs. I actually got as low at 191 lbs, but at 51 years old… that’s just too hard to maintain. I, quite honestly, don’t want to work that hard. So, I’ve settled in at about 203 lbs and that works for me. Whatever weight that allows you to be healthy and happy, is a good weight.

Here’s how my journey went. You’ll see times where I’d lose some weight and then gain some weight… then you can see where I got more serious:

If you’re unhappy with your weight, you can lose it. You really can. Just be realistic and know that it’s likely going to take more than a few months. Just keep working and if you have a set back- it’s ok. Start again. A single pound lost in a month is a victory. Set realistic goals and knock them down one at a time. You can do it!!